Peter Lindfield has published widely on Georgian Gothic architecture and design broadly conceived, as well as heraldry and the relevance of heraldic arts to post-medieval English intellectual, cultural, and aesthetic culture.

During Gothic Manchester Festival 2019, he co-organised an event at Chetham’s Library titled ‘Faking Gothic Furniture’. This involved discussing the mysterious George Shaw (1810-76), a local Uppermill lad who developed an early interest in medieval architecture and heraldry, going on to create forgeries of Tudor and Elizabethan furniture for a number of high-profile individuals and institutions at the time, including Chetham’s!

Peter will be presenting a talk on our Youtube channel on Thursday 10th June at 6pm, as part of Manchester’s Festival of Libraries. 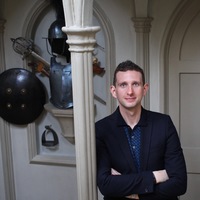