Behind the music with…Echo Vocal Ensemble 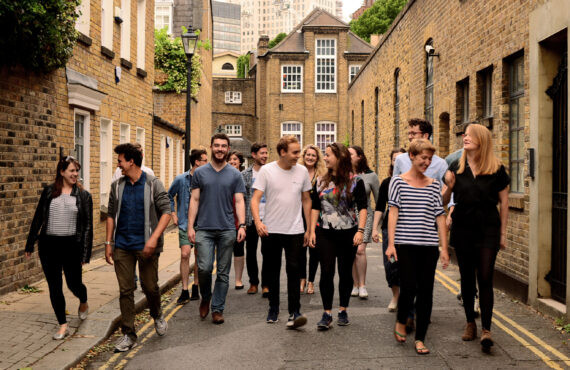 Echo is an exciting new vocal ensemble who are doing things a little bit differently. The young vocalists explore the full range of what ensemble singing means – working with and without a conductor, exploring elements of improvisation and performing less traditional music. Founding member, conductor and singer Sam Cobb tells us a little bit more about the group’s ambitions and current projects.

Can you tell us more about your Stoller Hall performance?

We are very excited to perform in Manchester for the first time, particularly in such a fantastic venue as Stoller Hall. It will be the second concert of our ‘Already Gone’ UK Tour, which presents a programme of music dedicated to the environment. We hope to take audiences on a journey that celebrates the beauty and power of the natural world, but that also explores its vulnerability and acknowledges the challenges that our planet is facing. With music spanning nine centuries by composers including Hildegard of Bingen, Benjamin Britten and Judith Weir, we’re presenting a wonderfully eclectic, vibrant and (we hope) thought-provoking programme. It also showcases the winners (Lillie Harris and Rory Wainwright Johnston) and shortlist (James Brady and Janet Oates) of our 2019 Composition Competition. In fact, this Manchester concert will be the World Premier of our shortlisted pieces by James and Janet, and we’re so excited to share these with our audience at Stoller Hall.

How can musicians highlight the climate challenge in a positive way for audiences?

What’s so striking to me about the climate crisis is that drastic environmental changes that usually span centuries, are occurring within human lifetimes. This unprecedented acceleration of climate change across the world is frightening to witness. I think that artists have a unique opportunity to approach these issues. One of my favourite aspects of being a musician is witnessing how music brings people together. When performing for an audience, you create this collective experience within the room, and I think that’s really powerful. A concert hall isn’t primarily a political space, so there is a certain freedom to express particular feelings, present ideas and explore challenging subjects without coming across like you’re telling people what to think or how to feel. Alongside the obvious acoustic implications, our name ‘Echo’ stems from the idea of art being a reflection of society and politics. By presenting an exploration of nature and the climate emergency in this programme, we hope to affirm our connection with nature and our place within the natural world, as well as acknowledging how our actions are damaging it, and to give hope that we can make positive change to protect our planet’s future by coming together.

Performer you most admire and why?

That is a really tough question… But I’d say right now that it’s Joan Armatrading. Thanks to my parents, I grew up listening to her music (particularly on long car journeys) and in the last two years I’ve become obsessed. The more I get to know her music, lyrics and creative processes, the more I love it. There’s this magical emotional direct-ness to Joan’s music generally, but particularly her singing voice that just breaks my heart but also gives me hope all at once. It encapsulates the strength one shows by being unapologetically vulnerable, and that is something I’m striving for in my own singing. Most people will know the single ‘Weakness in Me’ which is stunning, but trust me – there is worlds more to Joan Armatrading than that song, and you won’t regret discovering more, I promise!

Again, tough one! What immediately comes to mind is an opera I saw in Birmingham in 2012: Stockhausen’s Mittwoch Aus Licht, staged by Birmingham Opera Company. Hearing the word ‘opera’ you might think fancy auditorium, stage, period costumes and very long, dramatic arias – but this wasn’t anything like that. It was held in an old chemical factory, and so much happened that evening, it was quite extraordinary to be a part of. There were actors covered in paint and climbing the walls, a ‘world parliament’ of singers in umpire chairs, a trombonist in a paddling pool on wheels, live and puppet camels, and the infamous ‘Helicopter Quartet’ with four string players in their own personal helicopter flying above us – and that’s only some highlights. It was unforgettable and awe-inspiring, and I loved every bizarre minute of it, even though it was 6 hours long!

What you’ve missed most about live music?

The people. That collective experience in a room with other musicians and audiences, which simply can’t be replicated on a video call. Music can only really exist in the present moment, and I personally feel like the pandemic forced many of us to be stuck, pining for the past and/or worrying about the future (or vice versa). I’ve desperately missed that opportunity to set those thought-processes aside, to fully commit to a shared moment, and ‘leave everything on the dance floor’, or in this case, concert hall.