Behind the music with…Laurence Perkins 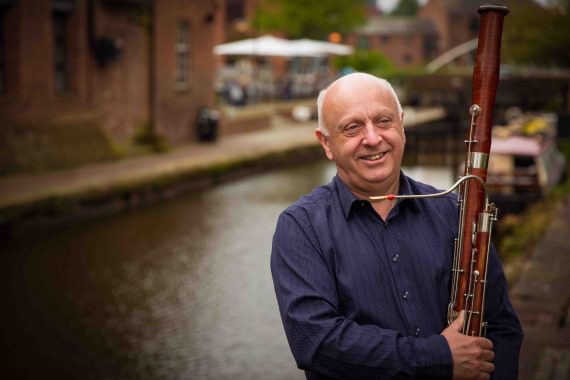 Based in Manchester, Laurence Perkins is one of Britain’s leading bassoonists. He has spent his career promoting the bassoon, helping the instrument and its solo repertoire to become better known

He joined Manchester Camerata as their principal bassoonist before beginning his solo career with concert performances throughout the UK and Europe, including recitals at the Wigmore Hall and the Purcell Room in London, concertos with the English Chamber Orchestra (at St. John’s, Smith Square) and with Manchester Camerata.

This Summer Laurence is performing three special live concerts at The Stoller Hall, his first live shows since the pandemic began. We caught up with the bassoonist ahead of his performance to hear more about his inspiration on and off stage….

Can you tell us more about your Stoller Hall concerts?

They are my contribution towards re-starting live music and live concerts in Manchester. These programmes are musically substantial but highly accessible, with a wide appeal, and each concert is quite different with a mix of ensemble and solo music. The ‘feel-good’ factor is present throughout!

What makes the bassoon so special to play?

The bassoon is an incredibly expressive and versatile instrument. Many people are not aware of its qualities. In these concerts you have a chance to hear it solo and in ensemble with other woodwinds.

Performer you most admire and why?

On bassoon, Sophie Dervaux (now principal bassoon in the Vienna Philharmonic Orchestra) is a wonderfully warm player, a real virtuoso in every musical as well as technical sense. However, in a broader context (i.e. not specifically bassoon) I have huge admiration for cellist Yo Yo Ma for his amazing innovation and imaginative projects, as well as his superb playing. We need new ideas, new approaches to concert presentation, and he has led the way with some superb ideas.

There haven’t been many recently! I hugely enjoyed Jonathan Scott’s magnificent performance at the BBC Proms last year, when he played Dukas ’The Sorcerer’s Apprentice’ and Saint-Saens Organ Symphony – all solo on the massive Royal Albert Hall organ! What terrific musicianship, virtuosity and stamina – a real entertainment and musical experience.

What you’ve missed most about live music?

Live music is the life-blood of people and societies. Administrative bodies need to understand this – it is not an elitist ‘optional extra’ in life, it is a powerful and very positive influence, through all genres. Many have benefited from recorded and on-line music during lockdown, but even with top-quality playback equipment it’s a poor substitute for the real thing. Live music needs to be properly supported by Government and local authorities, so that all types of music can be experienced live, to everyone’s benefit. Professional musicians also need to live, and amateur musicians need to play and sing. Children in schools need the chance to discover the joy and importance of live music, and how they can be a part of it. There has never in the entire history of the human race been a society where music does not occupy a central role – and we need it more than ever before, right now!

Laurence Perkins is performing at The Stoller Hall on Friday 16 July and Tuesday 27 July.