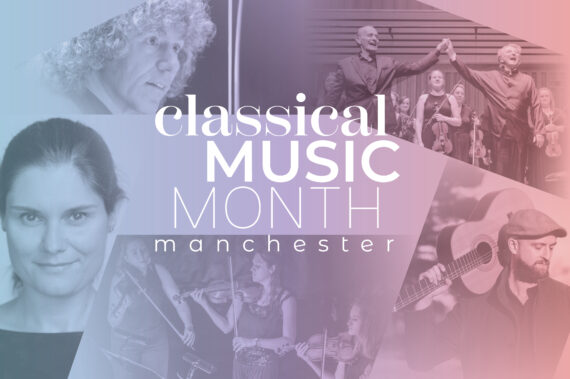 The programme – which features more than 30 live concerts across four venues – is the biggest city-wide celebration of classical music in recent years.

Manchester is arguably the UK’s leading classical music city outside London, with venues such as The Stoller Hall at Chetham’s, The Bridgewater Hall, Halle St Peter’s, BBC Philharmonic and Royal Northern College of Music regularly collaborating with world class orchestras and ensembles, including Manchester Camerata, Manchester Collective and more.

“Manchester is home to many incredible concert halls, orchestras and ensembles and has built a reputation for presenting world-renowned musicians alongside emerging young talent. Classical Music Month is a wonderful opportunity for all of us to come together and celebrate Manchester’s own thriving classical and chamber music scene.

This September there are more than thirty classical and chamber concerts taking place across the city. You don’t need to know your Beethoven from your Bach, and for those who may want to try the music for the first time there’s a series of free lunchtime concerts at The Stoller Hall.”

At The Bridgewater Hall, the BBC Philharmonic will be performing their opening concert of the new 2022/23 season, Jonathan Scott will perform his recital on The Bridgewater Hall’s world-renowned organ as part of the Lunchtime at the Opera series, and guitarist Tom Gamble will excite audiences with a diverse and virtuosic display of his own classical arrangements, featuring music by Jobim, Dowland, Gershwin, The Beatles and traditional folk music.

At The Stoller Hall, Manchester Camerata return with their second instalment of Mozart: Made in Manchester, delving further into the soundworld of his later operas and his most epic piano concertos. The award-winning Trio Bohémo will entertain audiences with their innovative and exciting programming, taking inspiration from The Stoller Hall’s Sounds of Nature season.  Plus, audiences can also enjoy free Lunchtime Concerts from some of the UK’s most exciting young musicians at Chetham’s School of Music.

Also at The Bridgewater Hall, Manchester’s Hallé Orchestra will be demonstrating their mastery of some of the best known classical works, such as Tchaikovsky’s Pathétique, featuring the Hallé’s Assistant Conductor Delyana Lazarova on the podium and solo cellist Guy Johnston. Meanwhile at Hallé St. Peter’s, Hallé musicians Stéphane Rancourt (oboe) and Tiberiu Buta (violin) will perform Mozart’s famous Oboe Quartet, enchanting audiences through the unity of the Hallé’s strings and winds.

And at the Royal Northern College of Music, the brilliant Manchester Collective have taken up residence and will be performing Michael Gordon’s cult 1997 piece Weather for amplified string orchestra, a brand-new collaboration with seminal sound artist Chris Watson, and Spanish filmmaker Carlos Casas. Also at RNCM, an exciting showcase will be taking place featuring the 2020 and 2021 winners of the college’s prestigious Gold Medal award.

Watch the video to learn more or see What’s On.