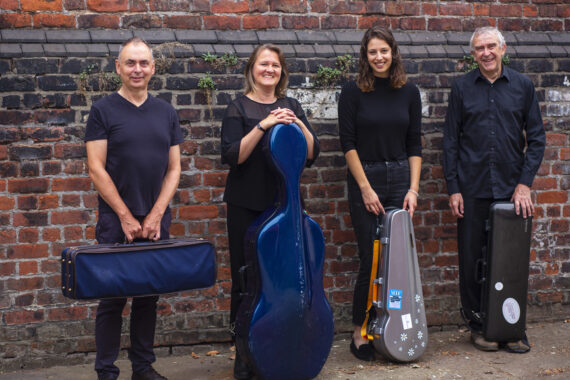 Following their live stream performance during Manchester’s lockdown, the Victoria String Quartet return for their performance with a live audience. The concert will feature a northern premiere of Elgar’s Early quartet fragments, which has never been performed on a northern stage till now.

Ahead of the live concert we go behind the music to learn what inspired the composer to write this incredible piece.

Elgar’s String Quartet from 1918 was one of his last major works, completed at the same time as the Violin Sonata, Piano Quintet & Cello Concerto.

Although it was his only finished work in the quartet genre, he had made numerous attempts at composing a string quartet throughout his composing life. There are at least fifteen different sketches and fragments by Elgar that survive. Some of them are very brief, only consisting of a handful of bars. More often, they have too many ‘holes’ in the music to provide a worthwhile idea of the musical substance, requiring extensive guesswork and pastiche composition to flesh them out.

The six fragments chosen here are the most complete in terms of written material on the page. The first in D minor is the most extensive, and was written in 1878 when Elgar was 21. It is a complete exposition, in an early to mid-Romantic style. Elgar copied the opening of the piece as material for his opera The Spanish Lady towards the end of his life, and included the word ‘Beethoven’ on his copy. Three other fragments date from the same period, those in A minor, G major and D major. Two fascinating sketches come from Elgar’s mature period in 1907, and feature many of the composer’s stylistic traits. Both were to be included in major works. The first swings along in 12/8, with shifting chromatic harmonies and a wide arch-like phrase in the first violin.

This music was to be used in The Music Makers in 1912 to underpin the text ‘A wondrous thing of our dreaming’. Just at the end of the sketch, a leaping theme is heard in F major, one that would become a key part of the opening movement of the First Symphony. The final fragment in F# minor–D major is almost a complete version of the end of the Scherzo and opening of the Adagio in the First Symphony. It may well be a full sketch in quartet form for that particular transition in the Symphony. It serves as an excellent precursor to the completed masterpiece of Elgar’s String Quartet in 1918.

You can book tickets to Victoria String Quartet here.