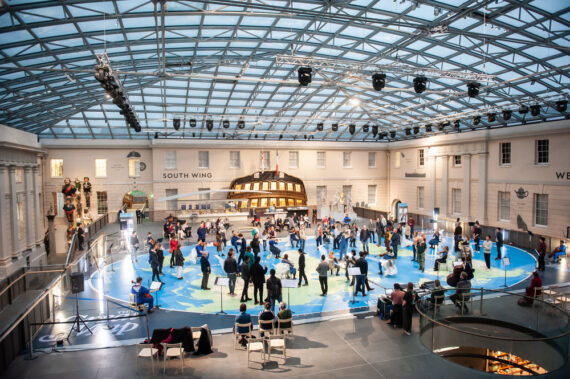 We’re getting ready for a very special performance next week, one which brings together a classical masterpiece, Vivaldi’s The Four Seasons, with a live string ensemble performing Hollie Harding’s Melting, Shifting, Liquid World. We caught up with the composer to learn more…

HH: Hi, I’m Hollie Harding. I’m currently studying towards a PhD at Trinity Laban in Composition. I also teach there on a course called Listening to the 21st Century. I recently had my final piece performed at The National Maritime Museum. It was called Melting, Shifting, Liquid World.

HH: A huge part of the piece was thinking about climate change and ocean pollution. Melting, Shifting, Liquid World was an immersive, site-specific piece written for performance at The Great Map at The National Maritime Museum. I wrote it for the Head of Strings, Nic Pendlebury, to play on electric viola, and Trinity Laban String Ensemble. There was also an electro-acoustic tape part delivered to the audience over bone-conduction headphones.

TSH: What exactly are bone-conduction headphones?

HH: They’re quite different to normal headphones. They send sound via micro-vibrations through your cheekbones and straight to your inner ear. And they leave your ear canal unplugged so you can hear other sounds as well.

TSH: What is it like to put on the bone-conduction headphones?

TSH: It certainly requires you to actually engage with it properly and find the sweet spot for you.

HH: Bone-conduction technology was developed originally for the army so that soldiers could hear instructions as well as the environment and they’ve since been put into commercial use by the company AfterShokz, primarily for cyclists and for runners so you can listen to music or podcasts while you’re doing your exercise.

TSH: Why have you chosen to present the music in this way?

HH: My PhD research is looking at space and physical action as elements of musical performance and how that can influence composition. So within the piece I was playing with the idea of layers of sound around the listener. The aim of that was also so that every listener, or every audience member, had a unique experience depending on where they decided to place themselves.

TSH: Could you tell us about the costumes that the performers were wearing?

HH: I knew quite early on that I didn’t want the performers to be just wearing standard concert dress, so I got in touch with the costume department at Laban and I ended up collaborating with four costume designers. We had two research and development days where they showed me textiles that they’d made out of recycled plastic. They wove plastic bags and up-cycled plastic into netting that was donated by fishermen.

HH: I want to raise awareness of the issues, which is why I did the piece. I’m not doing it as a gimmick. It’s so complicated. As I was saying about plastic bottles for aid for refugees, how do you even begin to pick and choose between saving a person or saving the planet. I want to get people to think about this huge beast of a thing that we’ve got to deal with.

You can  book tickets to Trinity Laban String Ensemble on Wednesday 23 March here.