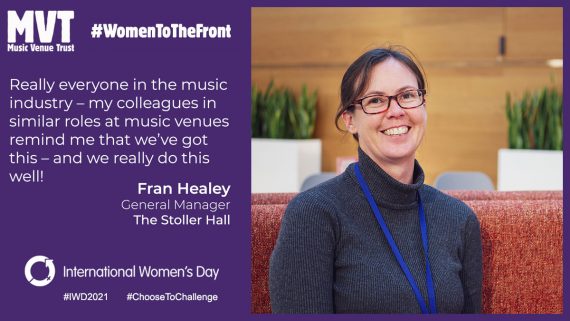 For International Women’s Day (IWD) 2021, we’re highlighting some of the incredible women behind the music at The Stoller Hall, including General Manager Fran Healey. Head over to our Facebook page or Twitter profile to see the other women musicians, performers, staff we’re celebrating!

A bit about you: Hi – I’m Fran, General Manager of The Stoller Hall.  I love working in the arts – it feels like a job which isn’t really a job – more like being paid to go and have fun doing what you love, surrounded by great people!  I ended up here via a rather circuitous route – after becoming an accountant working in retail in 2002, I went to United Utilities and then Electricity North West – doing their strategic and financial planning.  After a brief spell in the travel sector working on mergers and acquisitions, in 2014 I decided I’d had enough of the corporate world – I’d run right out of passion for PowerPoint and reporting to shareholders, and decided to move into the not for profit sector.  My life is richer, but my wallet is poorer!!  My job at The Stoller Hall covers everything from strategic planning and programming right through to staff rotas, general admin, and finance.  No day is the same.

Greatest career success to date:  I think I learnt most working at Electricity North West, where the Chief Exec at the time, Eoin Cooke, helped me to realise my potential. He gave me the confidence to pursue and develop my career.  I always aspire to manage like Eoin did – really knowing and finding the best in everyone in the team.

Most significant challenge: The utilities and retail worlds are quite male oriented – I remember feeling uncomfortable and out of place in many meetings in the early part of my career.  It’s not an issue I see so much in the arts, but of course the music industry has its own unique challenges – not least of all in times like now, during the covid pandemic.

Women’s Day Shoutout (person or organisation that inspires or supports you as a woman in music): Really everyone in the music industry – my colleagues in similar roles at music venues remind me that we’ve got this – and we really do this well!

If you could make 1 change in how the music industry supports women, what would it be?: I think we do pretty well already, but I would like to see more women in technician and programming roles.  I think there is something about being a woman that means you push yourself forward a bit less than a man in a similar role would do.  Over time, I would love to see the industry supporting women to shout out for themselves and develop that confidence of equal standing.

Hopes for the future (for you or for women in music more generally): One day, gender wont even be a conversation we need to have.  It wont be relevant.  We’re not too far off, but we’re not quite there yet!