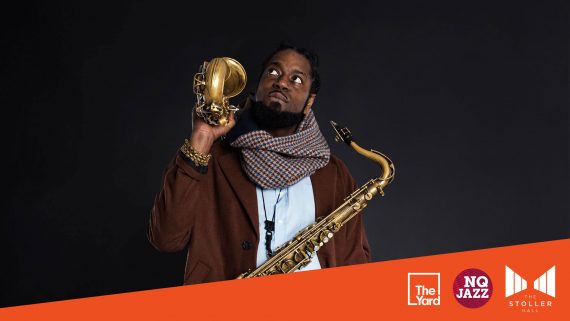 Alto saxophonist Soweto Kinch was born in London, England, in 1978. His father, originally from Barbados, was a playwright, and his British-Jamaican mother an actress. Kinch began playing woodwinds at the age of nine, learning clarinet at primary school. After meeting Wynton Marsalis four years later, he discovered modern mainstream jazz, first practicing piano, and in his teenage years concentrating on the alto saxophone.

Today he is one of the most exciting and versatile young musicians in the British jazz and hip hop scenes. Having received accolades and awards on both sides of the Atlantic – including a Mercury Music Prize nomination, two UMA Awards and a MOBO for best Jazz Act in 2003, in October 2007, he won his second MOBO Award, at the O2 Arena, London as the winner in the Best Jazz Act category.

But with the live music hiatus caused by the pandemic, watching Soweto reopen The Stoller Hall promises to be a highlight of the summer season.

1. What are you most looking forward to about the return of live music?Seeing and hearing audience reactions… and enjoying a drink afterwards.  2. What can audiences expect from your NQ Jazz performances?A dynamic mix of jazz and hip hop. Nail biting, edge of your seat, death defying improvisation… and some jokes.

3. What has kept you busy during the last 12 months?I created on an online festival #BlackPeril2020, by visiting historic sites of race riots across Britain last year. This year I’m writing a new orchestral piece called White Juju with explores identity, public health, BLM and history in the age of a culture war.  4. Has your musical perspective or perception of the industry changed over the past year?It’s confirmed my worst suspicions of the music industry – gorging themselves on streaming income whilst artists and composers languish without a reasonable share. It’s also shown me artists who will rise to the challenge to responding to a watershed moment I’m excited to see where this all leads.

5. Who has had a significant influence on your music?Steve Williamson, Bheki Mseleku, Kokayi, Pharaoh Monche  6. What music are you listening to at the moment?Igor Stravisky – The Rite of Spring And Gary Bartz – Harlem Bush Music