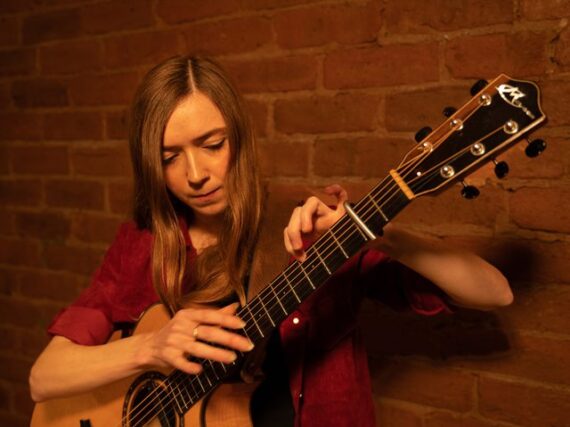 Becky first shot to notice appearing on a talent show on TV channel Sky Arts and is now an established solo musician. The inaugural Manchester Guitar Festival is celebrating all things six-stringed at The Stoller Hall – and Rochdale percussive fingerstyle guitarist Becky Langan cannot wait for her show and workshop. Becky has established a name for herself in the music scene after originally coming to public prominence appearing on Sky Arts television programme Guitar Star in 2016.

What are you most looking forward to at the first Manchester Guitar Festival?

She said: “It’s quite surreal, I didn’t expect to be in this position, playing on stage alongside these really well known musicians from around the world. I’m just going along with it.

“I can’t wait for the festival. I went to play at the venue and it’s absolutely beautiful.

“I’m excited because I haven’t been on stage much with the pandemic. This is a really nice gig and a nice way of getting back into things. It’s going to be good.”

How did you get into percussive fingerstyle guitar playing?

Becky first picked up a guitar aged 11 and for the first few years learned chords and strumming and was particularly interested in folk music and playing the blues.

However, she discovered what would turn out to be her own musical path when she came across a video online aged 14.

That was her introduction to percussive fingerstyle, which features a huge range of techniques and musical ideas including tapping the strings with the fingers, experimenting with alternative tunings, providing both melodies and rhythms and using the body of the guitar, all done by a single performer.

Becky said: “I didn’t know the style existed until I saw a video of a guitarist called Andy McKee online. At first I questioned whether he was a robot, I had never seen anything like it.

“I just started writing from there. I’m basically a self-taught musician and play by ear. I really enjoy writing and with this style of playing there’s more freedom and creativity.”

Becky will lead a workshop on Saturday 20 May at 4pm, followed by a performance at 6.30pm. You can learn more and book tickets here.