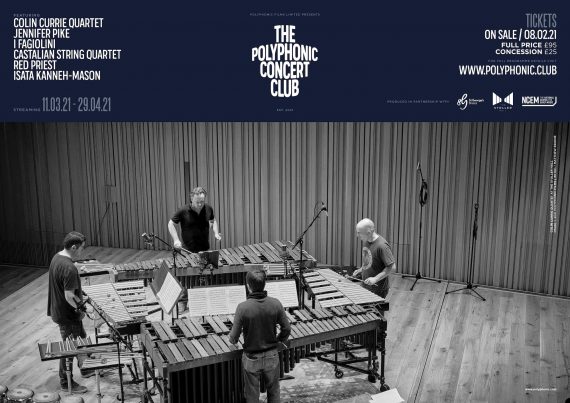 This week we announced a brand new concert series! Taking place at independent music venues across the UK will be six beautifully filmed online chamber recitals including a percussion quartet, violinist and vocal group, performing music from Byrd and Bach to Steve Reich.

The Polyphonic Concert Club’s first season is the first of its kind in the country, created in a response to the pause in live music concerts, caused by the pandemic. We spoke to the Club producer Greg Browning to about the inspiration behind the music.

What is the Polyphonic Concert Club?
The club is a collective effort between venues, artists and Polyphonic to produce quality filmed concerts for audiences who are cut off from attending live performance. We’re presenting six online recitals featuring superb musicians and a great repertoire list, streamed from three top concert spaces outside London.

What type of musicians are involved?
A mix of big names and rising stars, across a range of instruments, tastes and styles, from Colin Currie Quartet’s exploration of contemporary percussion and I Fagiolini’s vocal road trip around 16th/17th century Europe to Isata Kanneh-Mason’s personal selection for solo piano. The music in the series is what the artists chose to perform.

How can the club benefit the live music industry?
There’s nothing like live music but we can give a flavour of it and a strong impression of the musicians in performance mode, trying to connect with the public, as they are so eager to do. We all felt we needed to do something to try to keep the culture of music-going alive, at the same time as providing some much needed income for venues and artists alike.

What are you most looking forward to when live music returns?
The buzz before the show, the moment a bow first touches a string, the tingle factor, a drink in the pub afterwards. Sharing all that with other people.

What music have you been listening to during lockdown?
Alternatively, cataclysmic Mahler and serene Tallis, plus some Dave Brubeck. And, as ever with Polyphonic, a day doesn’t go by without a bit of Monteverdi.